Lately I’ve been contemplating the end of the Edmonton Police Station thrillers. With Seven books in the series under my belt (number seven is now being edited), I’m seriously considering ending the series on number eight. Book eight has already been plotted in my head. I know the story, I know what happens very well, but I’m not sure about the ending. The ending, the final scene that keeps pushing its way to the front of my cranium is one of death and destruction, of a final reckoning for the Edmonton team. Maybe it’s time.

The thing is, I’ve just published the first book in my new series,  JAIRUS’ SACRIFICE, a series I can’t wait to get to grips with. Book two is written, sat waiting in the endless editing chain. Truth be told, I can’t wait to put Jairus through hell to see how he copes. I know what book three will be about, even have a possible title. But not only have I got the Jairus series out, I’ve also got the idea for another series set in Devon and Cornwall where I now live. It will feature another spin off character from the Edmonton books as they leave London and head to the South West. I think I also might start a different series set in another police station in London, a sort of fresh start for me.

But am I really almost done with the Edmonton lot and their Special Murder Group? By the way, has anyone noticed anything unusual about the surnames of the Police Commanders that have featured in the Edmonton series? Real murder fans might have. If you have, send me your answer and if you’re correct, I’ll send you a free paperback copy of JAIRUS’ SACRIFICE when it comes out.

I’ve thoroughly enjoyed putting the Special Murder Group through their terrifying paces, knocking some of them off as I go. I think maybe it has a lot to do with the way I played as a kid. I’d have my toy figures on the carpet with me, creating little dramas, impossible situations that they had no hope of escaping. Each toy figure was a character, always the same character in my long running childhood soap opera. There was even one toy that was the leader of all the toys, and he went through hell regularly. My mother recently found one of the figures in her loft a few months back and it had half its face melted! He went through hell.

I found a quiet room and started writing. I pulled a few characters from the darkest parts of my mind and started to put them through hell and back, just to see how they coped.

But what of the Edmonton team? Haven’t they been put through enough horror already, surely they can’t take anymore?

The answer is I don’t know. I don’t think I’ll know until I write that last chapter of part eight in the series.

The seventh book will be out some time later this year, and I promise my readers that it’ll be a shocking, horrifying and dramatic book with a lot more depth as well as twists and turns. HOLMWOOD is on its way, and hell’s coming with it! 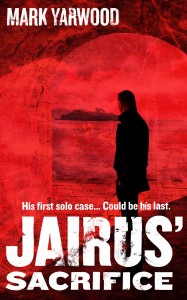