Welcome back to the world of the Special Crime Group, based out of Edmonton Police Station, where the team are gathering for yet another horrific, spine tingling and probably the most shocking investigation yet! It’s been a while since the dramatic end of WHEN THE DEVIL CALLS, the 5th book in the series, and we join a much changed team at the beginning of the 6th book, THE FIRSTCOMER, which will be released on 5th May. 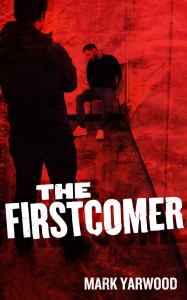 If you’re new to the Edmonton Police Station thrillers, you probably don’t know that most of the books in the series can be seen as stand alone thrillers, apart from books four and five, which continue in storyline. Personally, and I think my editor would agree, that from book three in the series, LAST ALIVE, is where the stories really kick start and the action and characters take off. As I’ve mentioned before when talking about the Edmonton books, I don’t believe in having the same lead character solving every murder they investigate, and so that’s why I like to mix it up and have different, and some times completely new characters, taking the helm and chasing down the latest killer or killers.
In my latest book, THE FIRSTCOMER, we have a new lead character, DCS Philip Radford, arriving from New Scotland Yard to become SIO in the investigation into the discovery of a mass grave in Enfield. The discovery leads the Edmonton team to believe they have an identity stealing serial killer that will not stop until he’s delivered his ‘message’.
Here’s THE FIRSTCOMER blurb:

HE’S AN ANGEL OF DEATH WITH A MESSAGE…

When thirty-four bodies, many of them faceless, are dug up at a holiday cottage near Enfield, it means the Edmonton Special Murder Group face their darkest, twisted and most dangerous investigation yet.

Without an experienced SIO to take the lead, the Yard send the obsessive misanthrope DCI Philip Radford to take charge of the mass murder case. Radford and the team soon come to realise that the killer is stealing identities, and appearing to the victims’ families before he executes his prey.

But Radford comes with his own baggage; like his hard-faced, loose cannon partner DS Paula Lowe, and psychopathic drug dealer Jason Vance, who is intent on exacting deadly revenge on him after he is released from prison.

As the identity thief killer’s victims start to pile up, it becomes horrifically apparent that he’s sending a message to his victims, the world, and especially to the Edmonton team:

I AM THE ANGEL OF DEATH…

The 6th book in my Edmonton series, will be quickly followed by first book in DCI Jairus’ new series, which will be called, JAIRUS’ Sacrifice. I’ve already finished the second Jairus book, JAIRUS’ Slaughter, and so I’m a little ahead of the game.
I’m also pleased to say that I’ve completed the 7th Edmonton thriller, called HOLMWOOD, which will be a big departure from the rest of the books and will not only deal with the investigation of two murders, but also the after effects and the ramifications for the victims’ families and the local residence. But of course there will also be a mystery at the centre of the book with plenty of twists and turns on the way.
Oh, and before I go, I’d like to reiterate what I’ve said before about my Edmonton series…anyone…even the major characters can die at any moment…

HOW TO STOP TALKING ABOUT WRITING AND WRITE!
THE RETURN OF JAIRUS