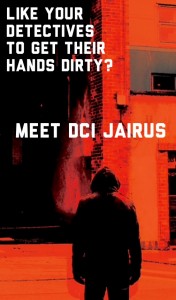 Ex-DCI Jairus entered the interview room smelling of booze, and obviously hadn’t shaved in a while. He slumped down in a chair and stared at me.
MY: When we first met you, DCI Jairus, you were suffering from PTSD after you killed Carl Murphy in self defence….

J: Yeah, is there a question there or what?

MY: Yes. I hadn’t finished. Are you OK now? Have you got over it?

J: Are you my mother now? You don’t get over killing someone…you just learn to deal with it. I’ve learnt to deal with it. I don’t like talking about Murphy anyway. Leaves a bad taste in my mouth. It was self defence, or don’t you bother to read the papers?

MY: All right. Let’s move on. They say you have an excellence clearance rate…but have you actually arrested anyone? Brought them in to face trial? A lot of people seem to die around you.

(Jairus stares at me for a while. I’m unnerved).

Jairus: Yeah, I have. Plenty. It all depends how they want to come…quietly or kicking or screaming. To me ‘clearance’ means getting the bastards off the street.

MY: But they have rights too…

Jairus: They? They? You mean the thugs? The psychos? All the serial killers I’ve tracked down? Like I said, my job is to get them off the streets…
MY: You’ve nearly found yourself ‘off the streets’ too, haven’t you?

Jairus: Yeah, nearly. Last time I was set up. I can only guess that I upset someone somewhere. I’ll find out who one day. Like I said, I’m still a free man.

MY: But without your warrant card… Pending an investigation…

Jairus: I’ll be back. They can’t keep me down for long. I’ll find a way. I’m looking into the future, not the past. I think it was F. Scott Fitzgerald who said “So we beat on, boats against the current, borne back ceaselessly into the past”…

MY: What about Cathy Durbridge?
(Another hard, cold stare)

Jairus: What about her?

MY: Well, you’ve got quite a fiery relationship…let’s not forget she was your alibi for the night Raymond Crow disappeared…

Jairus: Yeah, because that’s where I was…look, I don’t want to talk about Cathy…we’re friends…that’s all.

MY: Do you think you’ll ever see her again?

Jairus: I don’t know…look, I’ve had enough of this. I’m out. But watch this space. I’ll back at work soon enough…

At that point Jairus stormed out of the interview. I saw him later necking vodka at the hotel bar like there was no tomorrow.

But he’ll be back in JAIRUS’ SACRIFICE later this year.

THE FIRSTCOMER and Jairus’ return
HOW TO STOP TALKING ABOUT WRITING AND WRITE!